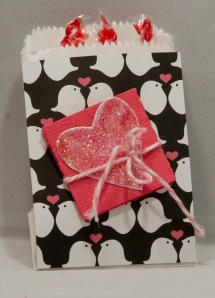 Everybody loves to receive valentines.

The best ones have a little sparkle and come with a little treat.

I created this one to be simple enough that you could easily make enough for an entire class (or let the kids make them) — but interactive enough to make it stand out.

I started with a little white bag that I’ve been carrying around for years. I don’t remember where I got it from originally.

I added a piece of Bo Bunny paper to the front and then used my Big Shot to cut out a heart and foldable strip from QuicKutz/Lifestyle Crafts.

I used Close To My Heart alphabet stamps to stamp the sentiment on the inside and another stamp from CTMH to stamp the Happy. (It was part of a Happy Birthday stamp, but I only inked the happy portion).

For the heart, I spread a bit of Designer Dries Clear Adhesive with my finger and then covered it in Pink Azalea Ultrafine Transparent Glitter 147. When dry, I adhered it to the front of the folded strip. Then, using Designer Dries Clear Adhesive again, I attached the strip and the string (from My Mind’s Eye) to the bag. Tying the string into a small bow keeps the strip closed and invites people to untie it and read the sentiment inside.

I tucked three Smarties into the bag, but you could put in a sucker, a few Hershey’s Kisses, or any wrapped candy.