Today, I wanted to share this adorable card I made. I used Flower Fairy stamps that I finally found — although I have been looking for them for over a year. I must admit I was a little disappointed in the stamps. While they are adorable, the packaging shows much more detail in the faces. I believe that you should get what you see, especially since the paper wraps all the way around the stamps, so you cannot look at them at all.

But, once I got over that disappointment, I did have fun coloring the images in with Copic markers. I then used a bit of Distress Ink to soften the white paper, added some background papers, a few other stamps from the set and some Piccolo pieces from Globecraft Memories. I also added a bit of their glitter, which is completely different from other glitters I have seen. The pieces vary in size and are round, rather than square. The sparkle is really unique.

I hope you enjoy a little fairy dust of your own!

In my “real” life, I’ve been working on a few stories about fairies … one on Fairy Doors appearing in Ann Arbor, and now downtown Howell, and one on creating a fairy garden.

Needless to say, I have fairies on the mind.

So, when the tiny Corked Vials from Tim Holtz/Ideaology arrived, I naturally thought of making Fairy Dust. 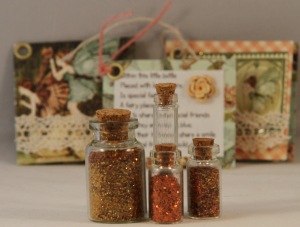 This project couldn’t be easier … I simply opened the bottle and filled it with glitter from Art Glitter.

I found two poems online to go with the jars.

At first, I planned to attach them to the jars, but I didn’t like the size ratio, so I’ve decided to just give them with the jars … 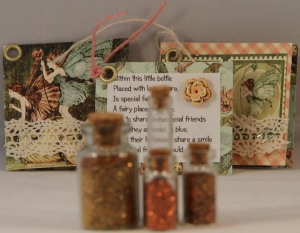 Here are the two poems I found. The first is copyright free and I modified it a bit.

Within this little bottle
Placed with loving care,
Is special fairy dust
A fairy placed it there.
It is to share with special friends
When they are feeling blue,
To lift their heart and share a smile
As special friends should do.

This one I tried to find the author for permission, but was unable to do so. I hope she doesn’t mind. It’s a beautiful poem!

If you have a special garden,

Where flowers and herbs abound

Then take a pinch of fairy dust,

And sprinkle it around.

The fairies will take notice,

And at the end of the day

They’ll tiptoe out upon the grass,

And dance the night away.