Sometimes the greatest ideas come in those wee hours just before falling asleep.

This is one of those … 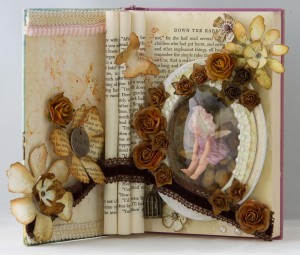 I have been wanting to make an altered book for many years — decades, actually — but I never had the courage to try. But, when I moved, I “found” an old copy of Alice in Wonderland. The book had purple on the edges of the pages and was such a nice copy that I couldn’t get rid of it — even though my daughter had written on many of the pages. And, with the perfect book in hand, I knew it was time to attempt to make an altered book.

It took me awhile because I wanted to allow plenty of dry time and I had to carefully think everything through, but it wasn’t difficult.

To start, I covered the inside of the cover in paper. Then, I cut out a few pages at the beginning (to get to pages filled with text). Next, I rolled a few pages and glued them down in the middle of the open book. Once that was dry (I was afraid of messing things up, so I did a little bit each day, allowing for plenty of dry time) I used Ranger’s Glue ‘n Seal to paint the edges of the pages on the right side so they would become one solid block.

Next, I traced the interior piece of one of the Globecraft Memories frames and began cutting an oval out of the book. I used my Fisker’s craft knife and continued to cut in sections until I made it all the way to the bottom of the book. I then coated the inside of the oval with Glue ‘n Seal and added some paper and ribbon. 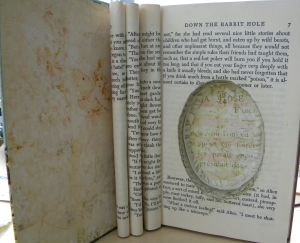 Then, I covered the exterior of the book in the same paper and added a tassel and metal plate that I’ve been carrying around for years …

Back on the inside, I decided I wanted to soften the white pages a bit, so I added some Distress Ink and discovered an awesome technique …

The Distress Ink doesn’t show where the Glue ‘n Seal was. Doesn’t it make for a great look?!?

Next, I wanted to make a place for my fairy to sit, so I used some paper, Glue ‘n Seal, Clearly For Art (by Wendy Vecchi, Studio 490) and a Tim Holtz/Sizzix die to make some flowers. I also pulled out some leftover Prima flowers in a variety of colors and sprayed them all with Adirondack Color Wash in Butterscotch and then a thin coating of Perfect Pearls Mists in Heirloom Gold. The flowers were a variety of green, pink and purple and I love how different they all became with the same treatment. Here’s the inside with the fairy (I used Glue Dots to attach her.

Next came the Globecraft Memories frame … I covered them with paper and paint and attached them together. I still needed a bit of space between the plastic globe and the fairy, so I added a couple layers of dimensional foam.

Then it was just a matter of embellishing … I added some ribbon, some more handmade flowers (some made out of the pages of the book I took out), some more Prima flowers that I dyed and a couple of metal embellishments. I also made a butterfly the same way I made the flowers (paper, Glue ‘n Seal, Tim Holtz/Sizzix die & Clearly For Art) and added some wire antennae. Finally, for some added girly charm, I glued on several Dew Drops from Robin’s Nest.

I love the depth inside the globe. Isn’t this the perfect addition to any girly room?!

I absolutely love Easter paper. Those little bunnies and chicks are just so cute!

Unfortunately, I never seem to have really good Easter photos to scrapbook. So, I have learned to improvise.

Instead of scrapbooking Easter photos, I used the Easter papers to make these adorable little holiday gifts: 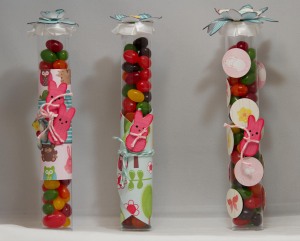 I used papers by Three Bugs in a Rug and Best Creation Inc. to make them. Then, I added some My Mind’s Eye Twine, ribbon and little Peeps cutouts made with a Lifestyle Crafts die. (Click on the photo for a larger version). 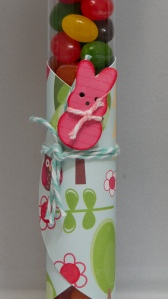 For the tops, I used the Tim Holtz Tattered Flowers die. Before I cut out the flowers, I used a Wendy Vecchi technique and Ranger’s Glue and Seal to adhere the papers to Clearly for Art by Studio 490. Then, I cut them out and heated them with a heat tool. While warm, they can be molded in any way you desire and when they cool, they retain their shape no matter what. It’s a really neat technique that I have used a lot recently. Check out Wendy’s blog for more information.

Here’s one of the flower tops:

I used a bit of Distress Ink and a brad for the center.