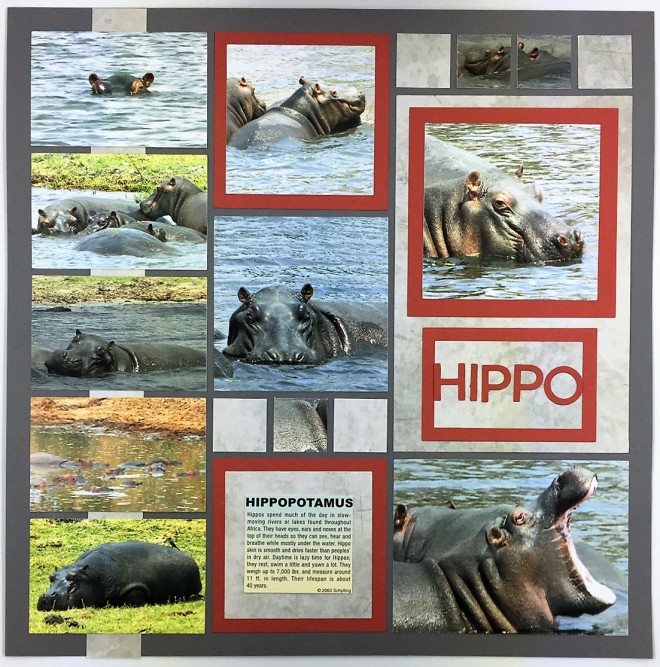 To say I love hippos would be a bit of an understatement. I LOVE them. They are not just my favorite animal; they actually invoke the same sort of breathless, heart-thumping, adrenaline rush most people get when they meet their favorite rock band, superstar or the President of the United States. For me, it’s hippos. (Artists are often a bit eccentric.)

So, when my sister first told me she was planning a trip to Africa, my very first question was, “to see the hippos?!” because why else would anyone go to Africa?? Naturally she had her own agenda, but she did take a few videos and some pictures of the hippos for me, because that’s what sisters do.

Had this been for my scrapbook, I probably would have printed these in 8x10s, but since this one is for her, I kept them all on one page using the Mosaic Moments system. I used the new letter die from Mosaic Moments, but I used just the inside of the letters to make my title look like it was coming out of the mat.

This one is on Pewter Grid Paper, following page pattern #305. I added a bit of cardstock and some patterned paper from We R Memory Keepers as accents. The explanation of the hippo is from a trading card I have been carrying around for a few decades. It was part of a set on animals my kids had when they were little — sort of like animal baseball cards. I knew it would come in handy eventually and thought it was perfect on this page.

You can see how I did it in this video.